Czechs love řízek, breaded and fried pork Schnitzel. It’s a traditional dish commonly eaten in restaurants or easily made at home. Řízek in Czech is also known as Schnitzel because of our two neighboring countries, where German is the official language: Germany and Austria.

➜ What Is Rizek?

Vepřový řízek (plural řízky) is a Czech schnitzel, a thin slice of pork, usually about ½-inch thick. It’s tenderized, then coated in flour, beaten eggs, and finally in breadcrumbs. Řízek is pan-fried in a generous amount of fat from both sides until golden brown.

To make Czech řízek Schnitzel, you will need:

➜ How to Coat Rizek

STEP 1: Pound a pork slice gently with a meat tenderizer—season with salt from both sides.

STEP 2: Coat the meat three times: Firstly in flour (photo 1), then in beaten eggs (photo 2), and lastly in breadcrumbs (photo 3).

STEP 3: Fry breaded pork in a pan in a thick layer of fat.

Coating the řízek pork must be done in a specific order, you can’t change anything. Czechs call foods prepared this way „v trojobalu“ – coated three times.

You could say that anything that’s fried „v trojobalu“, is loved by us Czechs.

Řízky Schnitzels are highly appreciated by children and adults alike.

A typical řízek is made from pork. However, the chicken breast fillet variant is very popular, especially with children.

Chicken schnitzel (in Czech "kuřecí řízek") is similar to chicken nuggets, just in an XXL version. It is especially loved by children.

Řízek is breaded in breadcrumbs, in Czech "strouhanka". Czechs make breadcrumbs from stale rolls / white bread (rohlíky or housky). The bread must be completely dry, then it’s ground in a breadcrumb grinder.

I store breadcrumbs in airtight jars with lids so as not to get damp.

A traditional řízek is made from pork cutlets, but our family prefers pork collar because it‘s fattier and not so dry as pork chops.

I myself buy pork collars in a complete package, which I cut into thin slices myself.

Mashed or plain boiled potatoes covered in melted butter go the best with řízky. An elegant option for Sunday lunch is parsley potatoes.

Garnish řízky with slices of lemon and sprigs of fresh parsley. Dill pickles are also common as a condiment in the Czech.

Especially at Christmas time, řízky are a very popular Christmas Eve dinner, served with potato salad. More in the article What do Czechs eat at Christmas

The potato salad is a national treasure. Czechs regularly compete with who has the best recipe.

➜ What Is the Difference Between Schnitzel and Wiener Schnitzel?

Řízek is also found in our neighboring countries.

In the south, the Czech Republic borders Austria, of which we were a part until 1918. In Austria, there is a variant of řízek known as „Wiener Schnitzel“made of veal leg, while the typical schnitzel is made of pork (Wien is the capital city of Austria).

A light potato salad without mayo is often served together with the Wiener Schnitzel.

Our western neighbors, Germans, know their variant of the pork řízek as paniertes Schnitzel. Paniert means breaded – coated with breadcrumbs.

Since the Czech language is as far as I know the only language to use ř as a letter and puts it in a lot of words, it can be hard for foreigners to pronounce the word řízek.

The pronunciation according to the IPA is [ˈr̝iːzɛk].

Vocabulary to the řízek Recipe 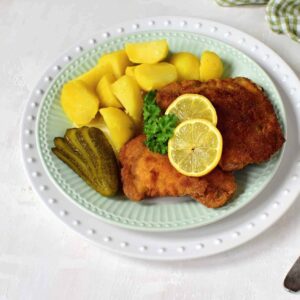 You will find more Czechoslovakian dishes similar to řízek in the category Czech Main Courses.