We, Czechs, know and love both of these variations. In this article, you’ll find the recipe named after the capital city of Austria: Wiener Schnitzel.

MY TIP: Try also this chicken schnitzel (it tastes delicious!)

What Is Wiener Schnitzel?

Wiener Schnitzel is a slice of veal leg, lightly pounded, ¼ inch thick at most. It is dredged in flour, then dipped in beaten eggs, and finally coated in breadcrumbs.

Breaded Wiener Schnitzel is normally fried in a thick layer of fat. However, clarified butter is recommended for the best taste.

Wiener Schnitzel got its name after Vienna, the capital city of Austria.

Austria is a small country in Europe, a southern neighbor of the Czech Republic. Czechs were a part of the Austria-Hungarian Empire for four centuries until 1918, so the Czech cuisine is partly based on the Austrian one.

Although Wiener Schnitzel belongs among Austrian national meals, it’s well known in the Czech Republic too. In Czech, we call it vídeňský řízek (a literal translation).

Sometimes, the origin of the Wiener Schnitzel is attributed to Germany, but that’s not correct. Germans have their own German style Schnitzel, which is made out of pork.

The pronunciation of the word Wiener Schnitzel can be tricky. In Austria, where the Wiener Schnitzer originates, they speak German. You have to pronounce it like this: /ˈviːnər ˈʃnɪtsəl

The English incorrect distortion of the word, Weinersnitchel (apparently a transliteration), is also common.

A typical side dish are potatoes prepared in various ways. In Vienna, they usually serve it with a light potato salad without mayonnaise - the Viennese salad.

Can I Make Wiener Schnitzel From Pork?

How Thick Should Veal Slices Be for Wiener Schnitzel?

After pounding, veal slices should be ¼ inch thick at most. If you have a thicker slice of meat, you can cut it carefully (but don’t finish it!) and then open it up as a book. Professional cooks commonly prepare the Schnitzel this way, and then it’s so large that it will cover a large chunk of your plate. 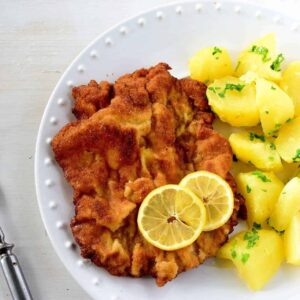 Serve with your choice of a potato side dish and garnish the Wiener Schnitzel with slices or edges of lemon.