Smažený sýr, also called "smažák," is very popular in the Czech Republic. It’s a classic found on the menu in nearly every restaurant. Czech fried cheese is easily made at home.

➜ What Is Czech Fried Cheese?

Czech fried cheese, known as Smazeny syr, is a slice of semi-hard cheese, about ½ inch (1 cm) thick. The slice is coated with flour, beaten eggs, and breadcrumbs, then pan-fried in a thick layer of fat.

Think of fried cheese as a main course, and either French fries or various types of potatoes (boiled, mashed, crushed, parsley potatoes) are served as a side dish.

➜ Which Cheese Is Best for Frying?

In terms of taste and melting point, the most common choice of Czechs is Eidam (Edam) or Gouda with a fat content of up to 30 %. These are semi-hard types of Dutch cheese.

How To Make Czech Fried Cheese

TIP: Dip the cheese in cold water before coating if you want the flour to stick to the cheese better.

➜ The Cheese leak out. What now?

If you don‘t want the cheese to ooze out during frying, coat it twice in the beaten eggs and breadcrumbs – the crust will be thicker then.

I didn´t double the coating, you can see the sides of the ‘smažák’ have leaked out a bit – but it doesn´t affect the taste of smažený sýr at all! 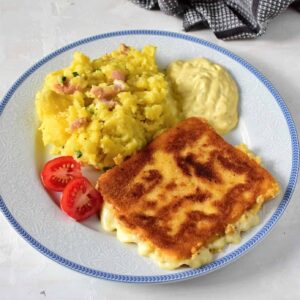