Valašský Frgál is a sweet Czech specialty made nowhere else in the world. Wallachian frgál tastes a bit like butter and smells like rum and could be filled with pears, tvaroh cheese, poppy seeds, plum butter, blueberries, and other fruit fillings.

➜ What Is Wallachian Frgál?

Frgál is a special kind of kolach, made from thinly rolled out yeasted dough filled with sweet fillings. The streusel topping is sprinkled on top, called „posypka“ in Wallachia.

Commonly, the filling and streusel layer are taller than the dough itself. After taking frgál out of the oven, the surface is splashed with butter mixed with spiced rum (in Czech "tuzemák").

Frgál is round, about 12 inches (30 cm) in diameter, and is traditionally baked in an Eastern Moravian region known as Valašsko (Wallachia).

Like so many other delicacies that have dominated the culinary world, frgal was originally a mistake.

When a clumsy baker failed at making kolach, she got angry and called it an frgál, a word in the Wallachian dialect used to represent flawed products.

Other names for this sweet pastry include „lopaťák“ or „pecák“.

Frgál is prepared from the raised dough, which is rich in fat, so it takes longer than other doughs to rise. Yeast dough for frgál takes at least an hour and a half to get ripe enough.

Before leavening, split the dough into two buns. Each will be about ¾ pound (330 g) in weight, which is how much you need for a single frgál.

Place the raised dough on baking paper and roll it out into a thin 12-inch circle. Lift the edge a little to prevent the filling from spilling out while baking.

⤍ Learn how to make dough rise in the oven.

Frgály pastries are most commonly filled with jam made from dried pears, plum butter, poppy seeds, or quark (tvaroh cheese). There are other options to fill the frgály, such as blueberries.

Since I live on the edge of the Jizera Mountains, I'm used to picking fresh wild blueberries when they are in season. A plethora of blueberries ripen in the nearby woods at the end of June and throughout July! That's also why I used blueberries to fill the frgal.

I recorded a short audio clip on pronouncing the Czech word frgál. The first word in the audio is "frgál", and the last is "valašský frgál", which means Wallachian frgál. 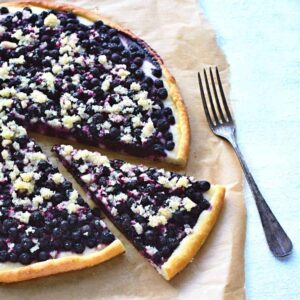