It is impossible not to love Czech krupicová kaše! Easily made from cream of wheat, this porridge is especially popular among kids. Krupicová kaše is also called „pohádka mládí“, childhood fairytale, because Bohemian grannies make very often this comforting food for their grandchildren.

My grandpa used to make the best krupicová kaše porridge. His secret ingredient was a spoon of honey he added to the kaše. Kaše then tasted even more delicious.

It's sweet cream of wheat made with milk, served on a shallow dish, liberally sprinkled with cocoa powder and granulated sugar on the top. Melted butter is then poured over the porridge for a smoother taste.

How to say krupicová kaše anglicky (in English)? The possible translation is Cream of Wheat, cream of semolina, or semolina porridge.

I recorded a short audio clip on pronouncing the Czech word "krupicová kaše".

The main ingredient to make krupicová kaše is coarse semolina, in Czech known as krupička.

There is Cream of Wheat in the USA, the most similar product to krupička. As I read in many food-related threads on the internet, Cream of Wheat should work very well in this recipe.

Krupicová kaše made from scratch using the cream of wheat is finished in a flash.

MY TIP: Never leave the stove alone. The porridge needs to be stirred constantly.

Because the krupicová kaše isn’t sweet by itself, you need to dust the surface liberally with sugar and cocoa and pour it over with lots of melted butter.

You can also slice the cold butter into thin slices and lay them on the surface of the krupicová kaše before serving.

There are some variants of topping for krupicová kaše. Our family favorite topping consists of granulated sugar mixed with regular cocoa powder (not Granko).

One funny technique of eating krupicová kaše: in a circular motion, from around the dish till you get to the center, where is most of the cocoa-sugar mixture and butter.

The practical reason is that the kaše is cooler around the edges and too hot in the middle to start there.

Some kids like to mix the kaše up, others can't stand this method. 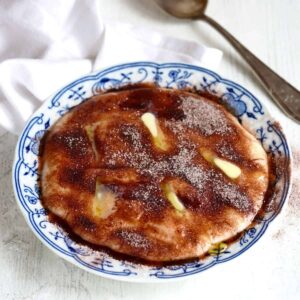