This is a recipe for Czech goulash soup, made from beef and potatoes, seasoned with crushed caraway seeds and dried marjoram. Gulášová polévka is widespread in Czech restaurants – every good pub will have gulášovka on its menu!

Czech or Bohemian goulash soup is made from thinly sliced beef, it has a distinctively spicy taste, and it goes well with fresh bread.

You can find similar recipes in Germany, Hungary, or even all across Central Europe. However, the Czech rendition of goulash soup is especially toothsome and appetizing.

TIP: If you are looking for real Czech goulash, check this recipe for Hovězí guláš!

This authentic recipe calls for more than a few ingredients, but wait, the delicious taste of Czech gulášová polévka will definitely surprise you.

Prepare all ingredients in advance, it will save your time while cooking.

Czech goulash soup pairs well with a slice of rye bread or with white bread such as rohlík or housky. Optionally, you can sprinkle the soup with fresh marjoram when served.

The soup is nutritious enough to be eaten as a main course.

How to Add Flavor to Goulash Soup

Making the base for gulášovka soup right is essential. You’ll need to fry the ingredients in the beginning. This way, the taste of goulash soup will amaze you!

Follow these steps (as decribed earlier in the article):

STEP 2: Melt lard in a pot, add chopped onion and fry until golden while stirring:

In the next step whisk beef broth and follow instructions in the recipe.

Soups generally taste best if they are prepared from the beef broth. The ideal way is to prepare the broth at home and then freeze it – at least that’s the way I store it.

How is the Czech goulash soup thickened?

The soup uses flour to be thickened. Fry the flour for 1-2 minutes in fat until golden, then add the liquid and cook for another 15-20 minutes. This way, the floury taste will be eliminated, and the soup thickens. Follow the exact steps in the recipe to thicken this particular goulash soup.

What is the best pot for making goulash soup?

A heavy-bottomed Dutch oven from the iron cast is ideal for making the goulash soup. Frying the onion and meat in it without them getting burnt is easy. A good-fitting heavy lid will take care of softening all the ingredients in the pot. 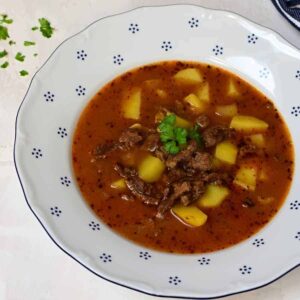 Czech goulash soup is delicious not only shortly after it´s cooked, it also tastes delicious the day after. Dobrou chuť!

Conversion chart
Do you like the recipe?I would be happy for your feedback! Please, rate the recipe and share your opinion or questions in comments bellow. Thank you very much.
« Bread Dumplings – Czech Houskové knedlíky
Apricot Streusel Sheet Cake – Czech Meruňkový koláč »