This recipe for Czech garlic soup is light yet rich in taste. It's often used as a fortifying soup while being sick, and some people call it the best hangover cure! In the Czech Republic, this traditional garlic soup is known as česnečka or česneková polévka.

My husband always asks for homemade garlic soup when he feels sick. And I’m happy to cook it for him because I know this wholesome garlic soup will ever get him back on his feet.

Try it too: If you feel you’re getting ill, try this clear garlic soup. Nothing beats a steaming soup in those cases!

➜ What Is Czech garlic soup?

Czech garlic soup, called česnečka, is a clear soup without cream made from chicken broth and potatoes, loaded with fresh garlic. Dried marjoram and some bay leaves give the soup the real Czech flavor. Threw a handful of toasted bread croutons into your plate as the last step!

I recorded a short audio clip on how to pronounce the Czech word česnečka. The first word in the audio is "česnečka", the last is "česneková polévka", which means garlic soup.

To make Czech česnečka garlic soup, you will need:

For bread croutons, you’ll need one or two slices of stale rye bread. If you don’t have rye bread, white bread will work as well. Czechs make bread croutons for soup from their typical white breads: veka, braided housky, or rohlíky rolls.

I've heard many people calling the Czech česnečka one of the best garlic soups globally gastronomy.

I have to say that it is true, but you need to know how to make it right. If you just boiled the garlic and potatoes in water, the soup wouldn’t taste as rich as it tastes when well prepared.

The secret of a hearty and rich česnečka soup? You have to sauté diced potatoes and sliced garlic before adding the chicken stock.

STEP 1: Peel the garlic cloves and cut them into thin slices. Peel the potatoes, dice them into cubes about ½ inch (1-1.5 cm) thick.

STEP 2: In a soup pot, melt the lard over medium heat. Add the potato cubes and sauté them until lightly golden brown. It takes about 5 minutes. Stir frequently.

STEP 3: Add the slices of garlic, bay leaves, and sauté for 1 minute (no longer!).

STEP 4: Pour in chicken stock, bring to a boil.

SETP 5: Reduce the heat, add salt, pepper, and marjoram, cook covered with a lid for 20 minutes, or until potatoes are soft.

Still hungry? Browse the category with all soup recipes!

Crunchy toasted bread croutons belong to the Czech garlic soup. Add them right before you eat the soup, not earlier.

After you throw the croutons into the soup, they soak up some water and stop being crispy. Thus, the croutons are usually made of rye bread, which is harder, and it remains crispy for longer.

If you only have white bread, you can use it, but the croutons made out of white bread soak up the soup faster.

How to make bread croutons in a few simple steps:

Place the bread croutons into the soup just before you eat it.

There are several Czech česnečka soup recipe variants. My recipe describes the traditional one, but if you visit Prague and order the soup in a restaurant, it can come to the table with extra ingredients.

Here are some of the more common extra adds or garnishes: 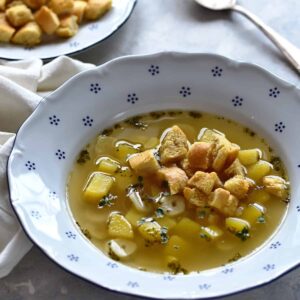