These little treats show up whenever Czechs organize a family party! They are called obložené chlebíčky, or in English, open-faced sandwiches.

Open-faced sandwiches or obložené chlebíčky are slices of a particular type of white bread (veka in Czech), with butter, or occasionally, deli salad (vlašský or pochoutkový salát) spread on top and garnished with rolled ham slices, hard salami, cheese and more.

The end aesthetic of the sandwiches is also essential. It dictates how the ham slices or cheese are garnished on top.

Read also: What do Czech eat at Christmas

Chlebíčky: A Czech Specialty with a Long History

The open-faced sandwich was invented in Prague by delicatessen shop owner Jan Paukert.

He lived in Prague during the so-called First Czechoslovak Republic (in the interwar period; 1918-1938), and his shop was considered to be one of the three most famous European delicatessen shops.

The chlebíček was created because Jan Paukert wanted something between finger foods and giant sandwiches. And the gourmet open-faced sandwiches really took off!

TIP: A bite-size open-faced sandwich is in Czech called jednohubka.

The base of the chlebíček is formed by a slice of white bread called “veka“ in the Czech Republic (similar to a French baguette).

Veka is a white stick loaf made out of yeasted dough. The slices of veka are about ½ inches thick.

It´s easy, you just need to grab the right knife and then a little patience to get even slices of veka.

Read on how to make homemade veka bread.

First, take a slice of veka and spread butter or some salty spread (Czechs typically use „vlašský salát“, a kind of ham salad).

Cook’s tip: Try out my sardine spread, it tastes heavenly good on veka!

This recipe uses the so-called „pomazánkové máslo“ something like spreadable butter, another famous Czech specialty.

You can then garnish the sandwich with the following delicatessen:

You can use various kinds of cheese, salami, ham, or vegetables. Sprinkle the egg slices with sweet ground paprika or chili flakes for a nice effect.

Look at this VIDEO on Youtube, Janek Rubeš known as Hones Guy, explains how to make Czech open-face sandwiches! Video with instructions in English. 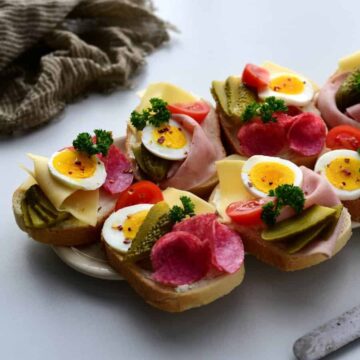 Put the chlebíčky on a tray and wrap them with a food-quality film, so they don‘t dry out. Remove the plastic wrap before serving.