This delicatessen salad with mayonnaise is called pochoutkový salát here in the Czech Republic. It tastes great with white bread (housky) as a quick snack or as a base for Czech famous open-faced sandwiches (obložené chlebíčky).

Table of Contents hide
Taste of Memory
Pronunciation
Ingredients
Instructions
Serving
Can You Make this Salad The Day Before?
Czech Deli-style Salad with Mayo – Pochoutkový salát

Pochoutkový salát was a popular Czechoslovak snack in the eighties. Czechs and Slovaks lived in one country, Czechoslovakia, which was ruled by a communist regime back then.

My dad was a driver and drove an Avia truck around entire Czechoslovakia. When I was small and didn’t have school, he took me with him.

We set out early in the morning, so dad had time to load the cargo he was transporting. We always had breakfast in a bistro on the way.

Pochoutkový salát with a white bread roll (rohlík) was the most common breakfast, and I have many nice memories of it. It tasted amazing!

I recorded short audio on how to pronounce the Czech word "pochoutkový salát", which means deli salad.

One of the main ingredients for this mayo salad is Czech salami called Gothaj.

I’m pretty sure you can’t find it on the counter in your country, but you can substitute Gothaj for sliced ham or mortadella.

To make Czech deli-style salad you will need:

The most famous pickles in the Czech Republic are named „Znojemské okurky“, small and crunchy pickled gherkins.

If you have all the ingredients ready, making this retro deli salad is very easy.

If you don’t find the salad creamy enough, add some brine from pickled cucumbers.

There are two common options for how to eat this deli-style mayo salad.

Pochoutkový salát is eaten as a snack with fresh white bread, most often with a rohlík or a houska in the Czech Republic.

Delicatessen salad is used as a base for open-faced sandwiches. We spread the salad on slices of veka, and decorate the sandwich with salami, cheese, and vegetables.

Pochoutkový salát contains many calories, so think about your health and don’t eat it in one go.

Can You Make this Salad The Day Before?

Yes! Just cover it and refrigerate; it can last 3-4 days. In my opinion, pochoutkový salát tastes even better the second day.

Warning: The flavor and texture combination of this Czech mayo salad is awesome with green peas, pickles, and sliced salami. It is hard to stop eating it! 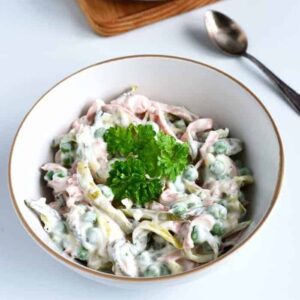 You can make a lighter variant of this salad by mixing the mayo with white yogurt in a 1:1 ratio.

There is a nice video created by a popular Czech cook Roman Paulus, you can watch it on Youtube here: How to make pochoutkový salát