➜ What Is Czech Easter Stuffing?

It’s a traditional meal baked in the Czech Republic just before Easter. It contains smoked meat; rolls dipped in milk, eggs, butter, and spring herbs. It is prepared in a pan and baked in the oven.

Traditionally, velikonoční nádivka was baked as the first meat-based meal after 40-day long fasting before Easter. There were up to 3 kinds of meat included.

➜ Where Did the Name "Hlavička" Come From?

Hlavička means „little head. “ The name is based on the thorn crown, said to be on Jesus’ head when he was crucified.

Other theories say that its name is based on its key ingredient, a cow’s head, or baked in a circle pan resembling a head shape.

Ingredients vary according to region. In some places, boiled meat is used instead of smoked meat. The meat is replaced with klobása, a Czech type of sausage, in other places.

You can also shape "nádivka" into a loaf stuffing form, not only spread it into a baking pan.

Recipes for velikonoční nádivka differ; the one here is the traditional one. Today, most people simplify some of the steps, such as not beating the yolks and softened butter. That’s a shame because the filling is less fluffy.

Nádivka is eaten both warm and cold. Eat it on its own or with boiled potatoes. If you don’t eat all the stuffing in a single day, fry it in a bit of butter in a pan later.

The velikonoční nádivka used to be baked in large quantities and eaten over the course of the whole of Easter.

➜ Spring Herbs in the Stuffing

The stuffing is a form of tribute to nature that’s waking up after a long cold winter. Many wild green herbs start growing in spring.

The herbs used to be handpicked in forests and meadows; today, they’re bought in shops and supermarkets.

One herb is, however, familiar and useful to the Czechs. It’s the stinging nettle! Stinging nettles are considered a weed here, and they grow in ditches. The touch of nettles is easily recognizable – they sting and burn.

However, stinging nettles are spring herbs that are beneficial to your health. They belong in the stuffing; that’s why I picked them on the edge of our garden (wearing gloves, of course).

Other herbs that can be used are parsley, spinach, spring onion, lamb’s lettuce, chives, and leek – all green.

You need a large number of herbs. Before using them, scald them so that they fit in the pan. Then cool them down quickly with cold water and slice them. Remove the occasional hard nettle stalk.

Do not miss these typical Czech Easter dishes: 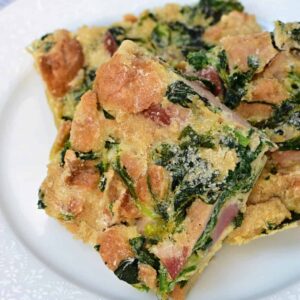 This recipe will give you servings for approx. 4 people.