It’s time for an egg custard meal you remember mainly from your childhood! Šunkofleky, Czech ham and noodle bake, a tummy-warming blend of pasta with smoked meat and plenty of eggs.

Šunkofleky (plural) is a popular Czech ham noodle casserole dish that is very easy to make. They are cooked pasta in a square shape, richly buttered, with diced smoked meat and eggs. The blend is then baked in the oven.

Baked šunkofleky are cut into pieces and can be garnished with parsley sprig. Pickles are traditionally served with šunkofleky.

I recorded a short audio clip on pronouncing the Czech word "šunkofleky" (ham and noodle casserole).

This recipe contains only basic ingredients, but the result is marvellous.

And that’s all. Incredible, isn’t it?

Which Pasta Is Best for Šunkofleky?

Šunkofleky is made out of pasta, known in the Czech Republic as „fleky“ or „flíčky“. They are wide noodles cut in squares, and their name is contained in the dish’s name.

You can also use plain wide noodles or elbows pasta as well.

The egg custard finds the ins and outs, making for a compact finished product that doesn´t crumble while it´s served on the plate.

Although šunkofleky could be translated as „ham and pasta, “the best meat to put into them is smoked meat.

A whole piece of bacon (not sliced) is ideal, which we’ll then dice. Cubed bacon is fried on a pan in a small layer of fat before adding it to the pasta, which pronounces the smoked meat's taste.

Šunkofleky aren’t baked for long. Noodles are already boiled and the meat is pre-fried. We need the eggs holding this meal together to be baked enough.

Šunkofleky are baked in an oven preheated to 350 °F (180 °C) without hot air circulation. They’re added to a well-buttered baking dish.

It takes about 20-30 minutes to bake them. It depends on the baking mold’s material and on the height of the layer of šunkofleky you’re baking.

For example, in my cast iron baking dish, it takes about 5-10 minutes more to bake them since cast iron takes a while to heat. 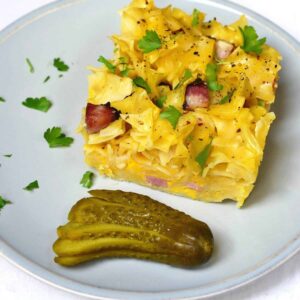 You can fry the rest of šunkofleky in a pan with butter later, it tastes great in both variants!

Conversion chart
Do you like the recipe?I would be happy for your feedback! Please, rate the recipe and share your opinion or questions in comments bellow. Thank you very much.
« Black and White Coffee Cake – Czech Míša řezy
Czech Yeast Pancakes – Lívance Recipe »