Rajská omáčka is one of the most iconic Czech sauces. It’s based on a broth made from beef, root vegetables, and tomato paste. Almost every national cuisine has its own tomato gravy. However, the Czech traditional rajská offers a uniquely rich sweet-sour taste.

Many Czech families argue what’s the “secret ingredient" of rajská (some people use cinnamon or grated gingerbread, for example).

There are also cooking competitions for the best rajská omáčka organized in the Czech Republic.

Rajská omáčka (rajská in short) is an old fashioned Czech creamy and sweet red gravy sauce made from tomato paste, which gives it its typical full, beautiful red color.

Rajská omáčka is served warm, usually with a slice of beef and bread dumplings – knedlíky.

With its spicy and intense flavor, rajská is just the thing you need for the cold winter months.

I recorded a short audio clip on how to pronounce the Czech word rajská. The first word in the audio is "rajská", the last is "rajská omáčka", which means tomato sauce.

We will start with making a broth by cooking beef and root veggies. It takes about 3 hours, so plan carefully. The good news here: after all broth-related ingredients start simmering in the pot, you can forget them for the rest of the cooking.

You need the broth for making the tomato sauce, plus, you’ll get the cooked beef this way, which is usually served with rajská.

Make The Beef Broth with Veggies

Making beef broth is actually very easy. The hero ingredient here is the time needed until the broth is done.

Rajská sauce is always prepared in a separate saucepan, using the beef broth as directed.

STEP 1: Peel the onions and chop them finely. In a pot, melt lard over medium heat. Add the chopped onions and sauté until translucent. (photo 1) Stir occasionally. Add the tomato paste, fry for 1 minute while stirring. (photo 2)

STEP 3: After the flour is shortly fried, the base is prepared for making rajská sauce.

STEP 4: Start adding beef broth in batches. Always stir or whisk until a creamy sauce is produced. Don’t worry if some lumps remain in a pot. They will be eliminated later while straining the rajská sauce through a sift.

STEP 5: Season the sauce with salt, vinegar and sugar. Add spices. Stir, bring to a boil. Reduce heat and let the sauce simmer for 20 minutes.

STEP 6: Strain the sauce through a sift in a clean pot. Discard the rests (onion, spices) got stuck in a sift.

STEP 7: Taste the sauce with salt and sugar if necessary. As the final step, add cold pieces of butter to the sauce and let them melt. Now the rajská is ready to be served!

Serve warm with sliced beef you cooked earlier in the broth. Rajská pairs great with Czech dumplings as a side dish.

How to thicken rajská tomato sauce?

Rajská omáčka is thickened with flour. At first, the flour should be fried a bit to get more flavor. After the water is poured over fried flour, it must be cooked for about 20 minutes. The floury taste disappears, and tomato sauce will thicken.
If you leave the sauce thickened with flour overnight, it will get even thicker. When warming it up, add several spoons of water to make it creamy again.

What meat to serve with rajská?

Rajská is normally served with a slice of beef, but it’s not the rule. Tomato sauce also tastes perfect with stuffed peppers or with meatballs.

Which side dishes go well with rajská?

No, classical rajská omáčka is not the same as spaghetti (or pasta) tomato sauce. 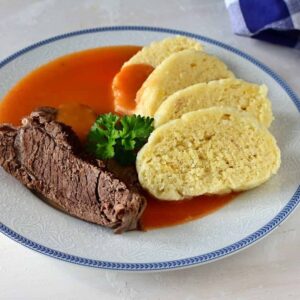 Broth from beef and root vegetables:

Broth from beef and root vegetables:

Place the warm beef and bread dumplings on a plate and pour the warm tomato sauce over them. You can garnish the dish with a sprig of parsley.

Conversion chart
Do you like the recipe?I would be happy for your feedback! Please, rate the recipe and share your opinion or questions in comments bellow. Thank you very much.
« Potato Soup – Czech Bramboračka
Czech Easter Sweet Pastry – Jidáše »