Sometimes I have a problem with my sons, who refuse to eat soups. There’re really only a few soups they like. However, one of them stands out even among the favorites – it’s Frankfurter soup, which they like so much that they always ask for more of it!

What Is Frankfurter Soup?

It’s a soup whose core ingredients are cut sausages fried in a pan. In the soup, you’ll also find diced potatoes.

The iconic taste is completed by combining minced garlic and sweet ground paprika.

The basis for the soup is comprised of beef broth. I myself have the broth ready in the freezer stored in small bags, and every time I need it, I take it out in advance, so it manages to thaw.

To prepare the soup you’ll need:

Once you have all ingredients ready, preparing the soup is quick and easy. This is how you cook it in few steps:

Which Sausages to Use

Sausages (párky in Czech) are used in many Czech recipes, including Franfurkter soup. These are similar to Wiener sausages, which are long and thin. In the USA, a good choice is a polish kielbasa (klobása). 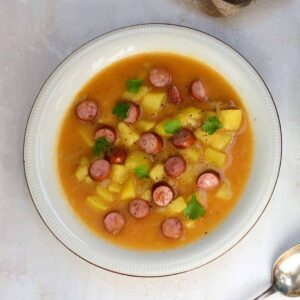 Just a few words about the origin of the soup’s name.

The sausages used in it have had various names over centuries, but Frankfurter Sausages is the oldest and perhaps most well-known name.

The history of Frankfurter Sausages lies back in the 15th century. Back then, merchants sold them on the market in the German city of Frankfurt am Main.

During the 19th century, the sausages have found their way into Wien, the capital of Austria—Hungary, a state comprised of many territories, including today’s Czech Republic.

Czechs have taken a liking to these sausages and started calling them Wiener Sausages. They quickly became a beloved delicacy in Czechoslovakia and its successor states – Czechia and Slovakia.

However, the 1989 Velvet Revolution brought an end not only to communism but also to all centralized smoked meat products regulation.

That’s why there’s no single official recipe for Frankfurter (or Wiener) sausages today.

This website uses cookies to improve your experience while you navigate through the website. Out of these, the cookies that are categorized as necessary are stored on your browser as they are essential for the working of basic functionalities of the website. We also use third-party cookies that help us analyze and understand how you use this website. These cookies will be stored in your browser only with your consent. You also have the option to opt-out of these cookies. But opting out of some of these cookies may affect your browsing experience.
Necessary Always Enabled

Performance cookies are used to understand and analyze the key performance indexes of the website which helps in delivering a better user experience for the visitors.

Analytical cookies are used to understand how visitors interact with the website. These cookies help provide information on metrics the number of visitors, bounce rate, traffic source, etc.

Advertisement cookies are used to provide visitors with relevant ads and marketing campaigns. These cookies track visitors across websites and collect information to provide customized ads.

Other uncategorized cookies are those that are being analyzed and have not been classified into a category as yet.

SAVE & ACCEPT
Send this to a friend